‘I hate travelling and explorers’ are the famous first lines of Claude Lévi-Strauss ‘Tristes Tropiques’, published in 1955 and mostly describing his expeditions to Brazil a good 15 years earlier. In an era that saw bookshelves filled with tales of journeys to exotic places and dangerous tribes, the anthropologist, a revered and heavily romanticized figure himself, feels ‘held back by shame and disgust’ as he stands before the task of putting his ‘adventures’ into writing. Anyways ‘anthropology is a profession in which adventure plays no part’. In his melancholic accounts we glimpse moments that prove that while still very much in service of colonial expansion, and therefore perpetuating a violent and destructive structural pattern against the Other, Lévi-Strauss has begun to understand this very violence and most certainly the futility of his efforts. Because ‘[w]hen we make an effort to understand, we destroy the object of our attachment.’ Many a teenage-self has probably indulged in day-dreams of leading Indiana Jones like lives – or maybe rather Jacques Cousteau or Captain Kirk, depending upon where your affinities lie. By now though, the anthropologist has undoubtedly become the villain in the story, and it is more than doubtful that a post-colonial anthropologist can be even conceived of. Almost at the same time Austrian writer Marlen Haushofer begins to work on ’The Wall’, a forceful novel disguised in the simple narrative of a journal. Creating an extraordinarily intense, at times pedantically accurate account of the everyday life, worries and perils of a woman, who is ‘trapped’ in a hunting lodge on the mountains and completely cut off from the rest of the world by an invisible yet all encompassing wall. Her only companions being a dog, a cat, a cow and her calf, she describes the transformation of her self and the way she relates to her environment in order to survive and ensure her physical and mental health. Almost uncanny in its relevance, it is hard not to read it as a premonitory eco-feminist work, which comments on modern life by actually describing its end. Oscillating between a utopian paradise (the beauty of nature, an escape from stressful life in ‘civilization’, with its responsibilities and roles to play within society) and a dystopian nightmare (nature unforgiving, dangerous and perhaps even cruel) it becomes obvious that survival can only be achieved in shedding any binary preconceptions such as human – animal, masculine – feminine, culture – nature, colonizer and colonized. Our culture though, is pervaded by the idea that the unfamiliar is by default dangerous. In the 1960’s so called ‘Stranger Danger’ campaigns flourish in the US and coin the eponymous term many English-speaking children will hear time and again during their upbringing. Intended to instil mistrust and fear towards any unknown and potentially malevolent adult, these campaigns not only ignore the fact that almost all harm to children is perpetrated by those close to them and not strangers, resulting in over-controlling, protective and manipulative parents and alleged nature deficit disorder in children. In the exhibition ’Stranger Danger’ Filip Dvořák evokes fragments of faded memories of a past full of false promise and adventure, the works by Ondřej Basjuk and Karolina Bielawska let us encounter our own invisible walls, only to realize that perhaps we were just looking at it the wrong way, and Mikołaj Moskal will have us rethink our relation and place in this world. Perhaps we’ll even catch a glimpse into a future where we are all earthlings, making our own kin in a system where human and non-human matter is naturally understood as one vast interconnected network.

Ondřej Basjuk’s body of work is dedicated to steadily deconstructing walls, marked by a childhood lived next to the boarder of the iron curtain and the ominous neighbour. What starts as a discourse on very physical real walls, turns into one of political and cultural barriers, personal and societal limitations and more importantly how to overcome them.

Karolina Bielawska paintings always react to space, they either adapt a more fluid character, as if nesting, they might double an existing wall or at times shatter only to be reconstructed into a second skin, their materiality and installation always suggesting close proximity to the architectural.

Filip Dvořák digs deep in the treasure trove that are the histories of art and architecture, alluding to the construction or deconstruction of walls and other markers of division such as windows, arches or thresholds. At times very literally, at times rather metaphorically when works playfully and not without humour travel between different time periods and reinterpret or appropriate long gone cultural symbols.

Mikołaj Moskal’s works on the other hand seem almost suspended in a historical vacuum. Shapes and figures let us suspect concrete objects that might have served as inspiration only to remain abstract creations. Sensual and emotional relations arise in a universe concerned with different ways of seeing and intuiting.

During FOAF Prague stone projects hosting Wschód, Warsaw. Friend of a Friend is a gallery sharing initiative launched in 2018 with editions already in Warsaw and Berlin. The Prague 2019 edition, co-organised with Stereo and Wschód, involves nine galleries based in Prague, who will open up their exhibition spaces to international gallery guests, to friends and to friends of friends. The aim of FOAF is to establish new networks, to exchange ideas with our guests – gallery colleagues, artists, curators, art critics and collectors from abroad and to enable local audiences to interact with the works of international artists whose work has not yet been widely, if at all, exhibited in the Czech Republic. 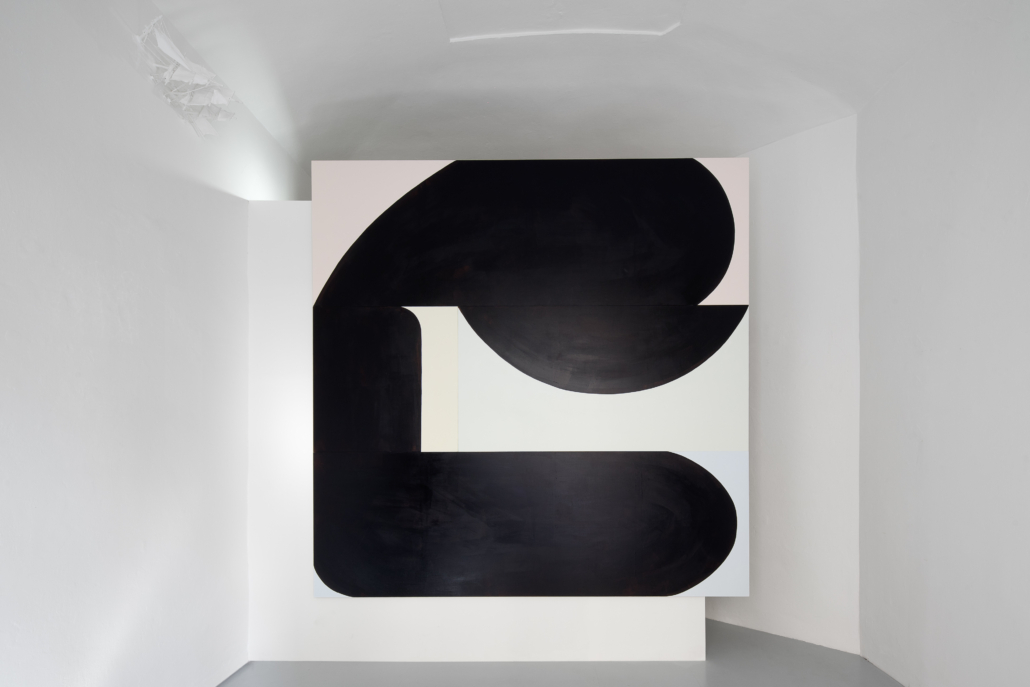